You are here: Home / By Age / Elementary / Tide Pool Skip Counting Math Game (Printable)
As an Amazon Associate I earn from qualifying purchases. You can read more on our disclosure page. 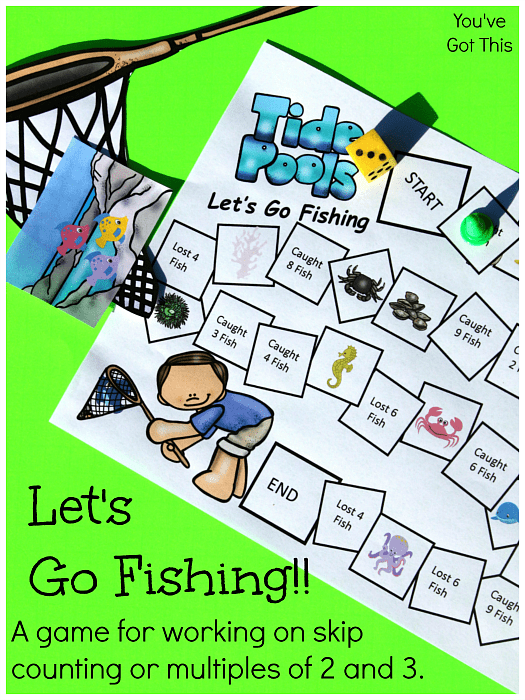 Building Off Your Child’s Interests

If you are in my house for more than 30 minutes, you are going to hear something like….

My boys are huge Wild Kratts fans. This week a show came on that they hadn’t seen before. Their excitement was high as the Kratt brothers became different animals trying to survive the harsh intertidal zone.

When it was over my boys immediately became hermit crabs, sea stars, and even clung to a pillow as a barnacle. When we hit the library, I was surprised, though I shouldn’t have been, to see ocean books filling up our cart.

If my kiddos are interested in sea animals, well then let’s run with it and learn some other things in the process.

My oldest, a six year old, has mastered skip counting, and is beginning to understand the relationship of skip counting and multiplication. My middle child, a four year old, has been working on learning to skip count as we sing and dance with a few of our favorite You Tube videos each morning.

I don’t want what they have learned to slip away during the summer, so, with their new found excitement over ocean and tide pool animals, I created a game that would combine the two.

This game is quite simple to make and requires very little prep.

1. Print out the game board, fish cards, and nets here.

2. Cut out the nets and fish cards.

3. Grab a die and game markers (use pennies or other small toy), and you are set. 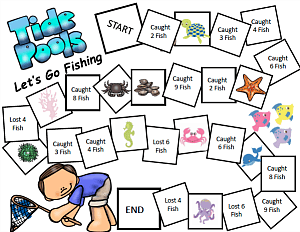 How to Play the Skip Counting Game

The goal of this math game is for players to collect as many fish as possible while practicing skip counting as they play!

Players take turns moving around the board based on the roll of the die. As they go around the board, they add fish to their nets. However, fish can only be collected in groups of two or three, so children will have to use skip counting and multiples to figure out how many cards to take. (For example, if a child lands on a space that says “caught 6 fish”, the child will need to take two cards with 3 fish on each for a total of 6 fish or take three cards with two fish on each for a total of 6 fish.)

At the end of the game, the player with the most fish wins!

My six-year old, who gets math with little explanation, figured out the multiples quickly, and I would use that word with him. Our conversation went a little like this…

Me: Is four a multiple of two or three?

Me: How do you know?

Me: How many cards do you need?

Me: Why? Can you tell me with an equation?

He thought for a second, and I could tell he was counting by twos. Then he correctly said: 2 x 2 = 4

My conversation with my four-year old sounded a little different.

Me: Ok C, you get to pick up six fish. Let’s count by two and see if we can get to six by counting by twos.

We counted by twos and his eyes lit up when we reached six. I then instructed him to pick up the cards with two fish and count by two every time he picked up a card. He did it and correctly had three cards in his hand.

We made our way around the board and I eased up on the conversation as they began to get more comfortable figuring out what they needed. When both boys reached the end, another opportunity presented itself for learning.

We added up the two totals and then did a quick comparison. N was thrilled to see he had the most, and was therefore the winner. C might have been a little sad, but no worries as he won the next game.

When all is said and done, I’m all for some sea star power if we get to learn multiples in the process!

Want to continue learning about sea creatures. Check out this free BUMP game we also used while they are fascinated with the ocean. I’m Rachel. A wife, mama of four little ones from ages 2 – 6, former public school teacher turned into a homeschool mom, and blogger at You’ve Got This. I love blogging about the math I’m doing with my kiddos, and also what I used to do with my 4th and 5th graders. Though I mainly blog about math you can find some phonics and STEM projects there too.