You are here: Home / By Age / Preschool / 75+ Hands-On Ways to Explore Letters of the Alphabet
As an Amazon Associate I earn from qualifying purchases. You can read more on our disclosure page.

Using hands-on activities to explore letters of the alphabet is one of the best ways to help introduce young children to the ABC’s. Here’s a collection of over 75 alphabet activities that will help kids learn letter recognition, letter sounds, letter formation, letter writing, and more! (This post contains affiliate links.) 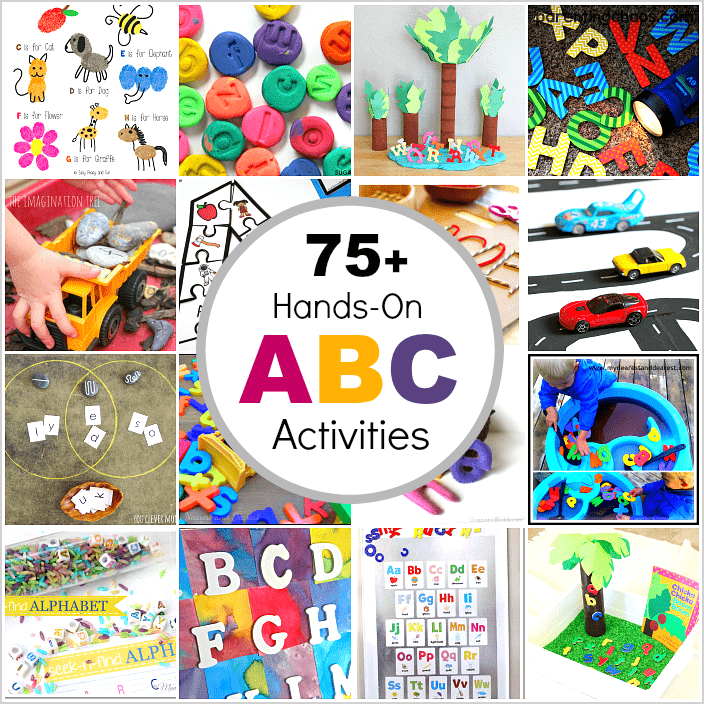 Introducing children to the alphabet is one of the topics I get most excited about both in the classroom and with my kids at home! It’s so exciting to help kids grow an interest in letters and develop a positive feeling towards reading.

One of the things I’ve learned as a parent is your child is never too young to be introduced to letter learning. There are so many fun ways to practice the alphabet with fun, hands-on activities.

Instilling a Positive Feeling in Your Child Towards Reading

My biggest piece of advice is to pay attention to your child’s interest and stress or anxiety level when doing any learning activity, especially activities related to reading. The last thing you want to do is hinder your child’s love of reading. (If you’re interested more on this topic, I invite you to check out my 5-part series on teaching your child how to read. It’s one of my earliest posts so the photos aren’t the best quality, but it’s full of all kinds of useful tips!) 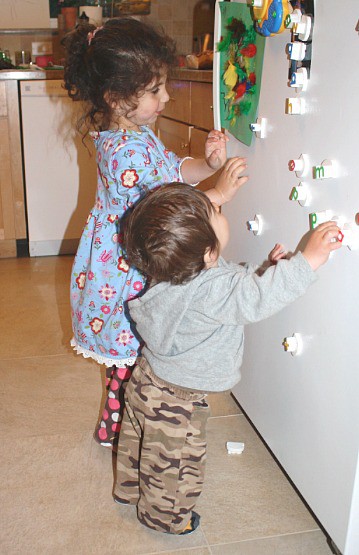 Children are all different and respond to learning in different ways. Lucy (now 8) was always interested in letters. She was playing with her wooden alphabet puzzle from age 1 and, from playing it with me almost daily, she learned to recognize all the letters of the alphabet and almost all letter sounds by age 2. She was always interested in working with letters through play and wanted to know the letter sounds and practice them together often.

Theo, my preschooler, is very different from Lucy. If we try to sit and do the same activity Lucy enjoyed as child, he gets frustrated and loses interest quickly. I’ve had to work on integrating his interests into playing with letters- like driving his toy cars on letter-shaped roads (which you can find in the collection below) or doing more gross motor and active games with him. (Now they even now sell road tape! You can use it to make road letters for your child to drive his or her cars on.) 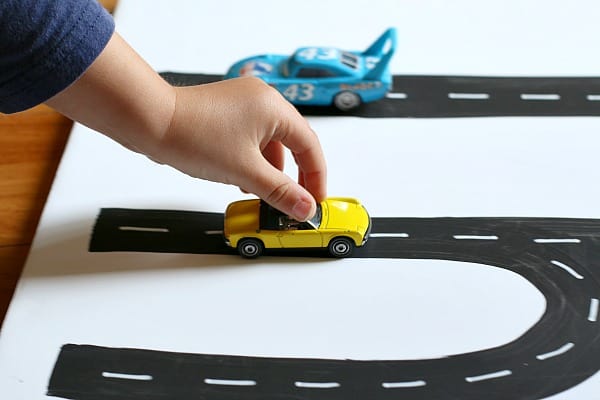 No matter what your child’s interest or learning style, you’ll find all kinds of creative ways to help your child with learning the letters of the alphabet through play in this collection. I’ve divided the letter learning activities up by subject and/or learning method to make it easier for you to find just what you’re looking for!

75+ Hands-On Ways to Explore the Letters of the Alphabet

Alphabet Construction Site from My Nearest and Dearest

Alphabet I Spy Game from I Heart Crafty Things

Feed the Alphabet Monster from I Can Teach My Child

Alphabet Squish from I Can Teach My Child

Alphabet Maze from Hands On As We Grow

Alphabet Ball from Playdough to Plato

Fishing for Letters Game from No Time for Flashcards

Alphabet Photo Scavenger Hunt from Fun at Home with Kids

Building the Letters of the Alphabet

Building Letters of the Alphabet with Pretzels from Buggy and Buddy

Letter Constellations from No Time for Flashcards

Window Streamer Letters from No Time for Flashcards

Build a Letter with Junk Materials from Growing Book by Book

Building Letters with Foam Blocks from Gift of Curiosity

Build Giant Letters Outdoors from And Next Comes L

Writing the Letters of the Alphabet

Tracing Letters of the Alphabet with Cars from Buggy and Buddy

Find and Write Scavenger Hunt from Coffee Cups and Crayons

Playing with Letter Stones from Buggy and Buddy

DIY Felt Letters of the Alphabet from Buggy and Buddy

Make Alphabet Soup from My Nearest and Dearest

Sorting the Letters of the Alphabet

Letter Sort: Curvy or Straight? from Playdough to Plato

Alphabet Sorting on the Light Table from And Next Comes L

Big Letter, Little Letter, What Do You See? from Growing Book by Book

Alphabet Road: Letter Sorting with Uppercase and Lowercase Letters from No Time for Flashcards

More Fun Ways to Explore Letters of the Alphabet

Make a Magnetic Alphabet Board from Mama Miss

Create a Literacy Table from One Perfect Day

How to Make an Alphabet Letter Box from Fun with Mama