This year for my daughter’s 7th birthday we had a shark themed party! My shark-obsessed daughter and I had tons of fun creating all kinds of shark activities for the party. 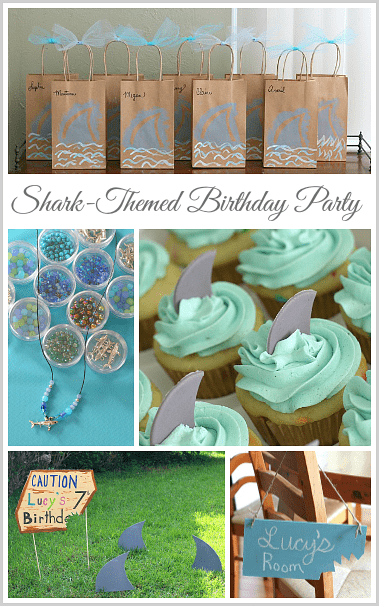 This year Lucy wanted to have a shark themed birthday party, which is not surprising- this has been the year of all things sharks as far as Lucy’s been concerned! (Last year’s party was a fish-themed birthday, so we’re still in the same vicinity as far as themes go.) The whole family collaborated on the preparations for the party which made it super special. (This post contains affiliate links.)

Shark Activities for the Birthday Party

My husband was super excited to prep these mini chalkboards for the girls that served as both an activity and favor for the party. He used his new jig saw to cut mini boards with shark bites out of the corner. He also drilled two holes in the top of each board.

Before the party I painted each board with a light blue chalkboard paint (similar to this) and tied some twine through the top of each sign.

During the party each guest used chalk to decorate their sign. There were some really cute signs, and I wish I had gotten pictures of them!

They took the mini chalkboard signs home after the party to hang on their bedroom doors or walls. The girls loved that they could erase the boards and write new messages and pictures on them! 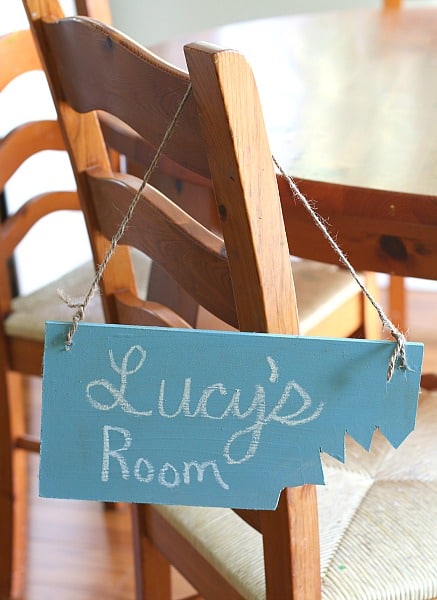 Another shark craft we did at the party that also served as a party favor was making shark necklaces. 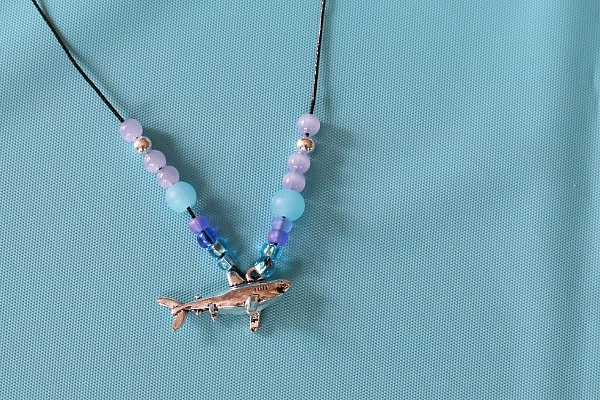 I bought some thin, elastic cord from our local craft shop, as well as an assortment of beads which I placed in the same bead holder I used for our color array activity. I also ordered some shark charms from Lorettas Beads on Etsy.

The girls used the beads and charms to create their very own shark necklaces! 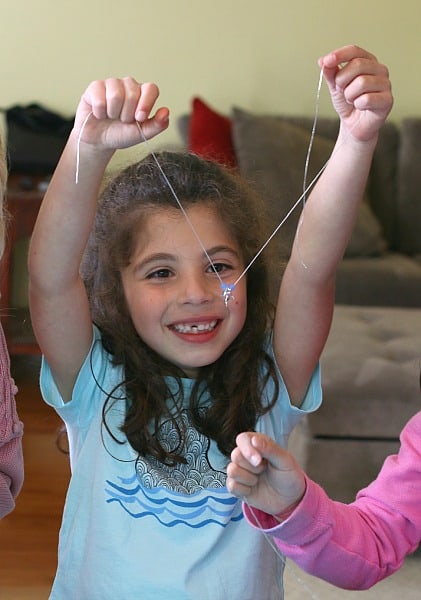 My husband made a bean bag toss game for the kids to play outdoors with some wood and paint. (It was designed to be similar to the CornHole game, so we could keep it after the party to play in our backyard throughout the year). We bought these beanbags to use with it, although you could use any beanbags. I think this would be super cute painted like a shark with some beanbags shaped like fish!

For the prizes, I placed these plastic sharks into a brown, paper lunch bag and then had the girls line up pretty far from where the hole was. The object of the game was to toss your bean bag through the hole. Once you did, you got to reach into the bag and pick out a shark to keep.

The players were only allowed to win one shark, but if you got another bean bag though the hole, you had the option of putting your shark back in the bag and choosing another one. (I love how the girls always chose to do that!)

I bought these wooden circles, ocean animal stamps, ink pad, and little organza bags (similar to these). The girls used the materials to make their very own ocean animal memory game!

I always love decorating the favor bags! (Last year we used bubble wrap for our fish-themed favor bags.) This year we did stenciling. 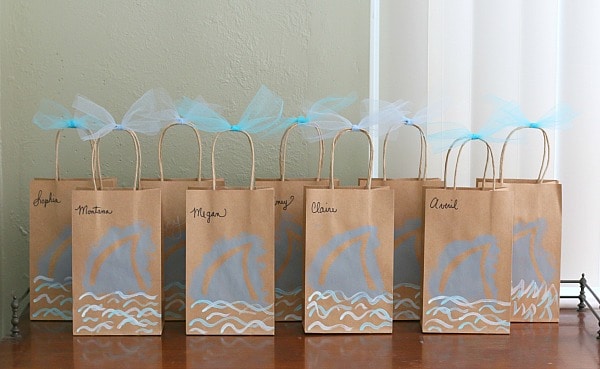 I cut out a shark fin outline from some cardstock, and we used gray paint and a sponge to stencil the shark fin onto the front of some brown craft bags. We also used different shades of blue paint and a brush to paint waves below each shark fin. For the final touch, I wrote the kids’ names with a Sharpie on the bag and tied bow onto the bags’ handles with tulle. 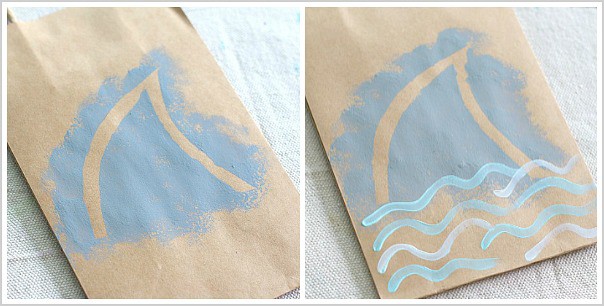 We placed bubbles and shark stencils into each bag. As the party went on, the kids put their shark necklace, shark prize, and memory game into the bag as well. 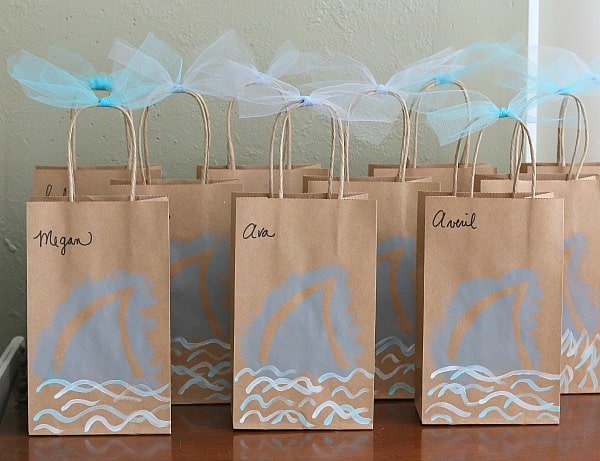 Theo was so proud to make these shark sun catchers all on his own for the party. You can find the directions for the shark suncatcher craft here. 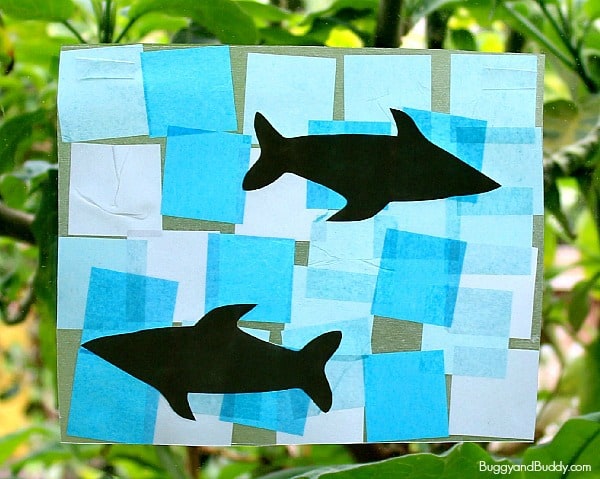 I made a sign for Lucy’s party using foam board and Sharpies and cut it out to look like a shark had bitten it. I taped it to two dowel rods and stuck it into the yard.

To make the shark fins in the grass, I cut out two identical shark fins from gray foam (similar to this) and glued them together around the edges (but not the bottom). Once the fins were dry, I stuck a 12 inch dowel into the grass and placed the fins on top. 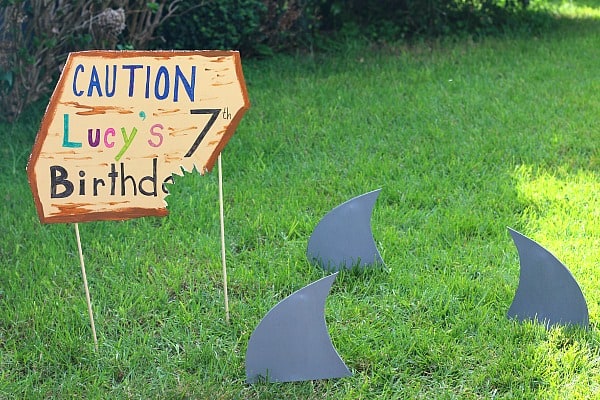 When I saw this shark t-shirt from Feather 4 Arrow on Etsy, I had to buy it for Lucy to wear for her party! It was super soft, and it’s now one of her favorite shirts! 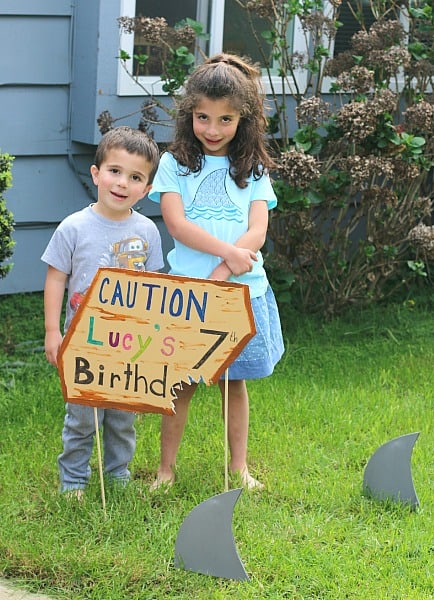 For Lucy’s actual party we had a cake that wasn’t shark themed. But for treats to bring into her class at school on her actual birthday, we made shark cupcakes!

I just used a cake mix for the cupcakes and followed this recipe for the icing. (I just added a few drops of blue food dye to color it.) I ordered the fondant shark fins for the cupcake toppers from EC Toppers on Etsy. 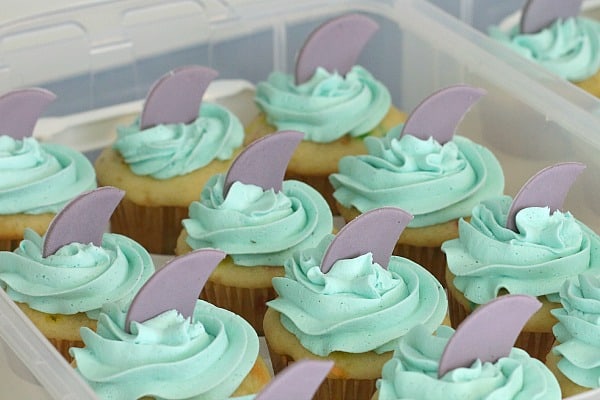 Lucy and her friends had so much fun at the shark birthday party, and we all had so much fun planning it together! Now Theo says he wants a shark party too- we’ll see what his final decision is when his birthday comes this June!