You are here: Home / At Home / Parenting / Nintendo Switch Review with Favorite Games for Kids
As an Amazon Associate I earn from qualifying purchases. You can read more on our disclosure page. 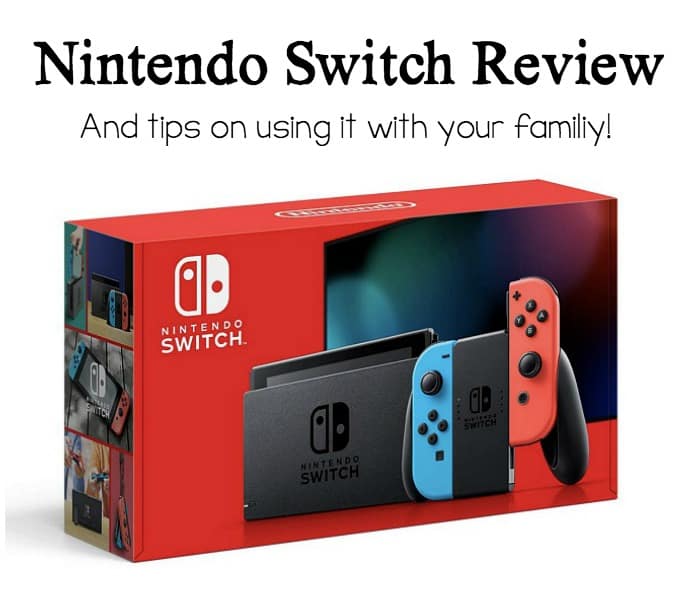 For years my husband and I have debated on whether or not to get a gaming console for our family. The kids had been begging for a Nintendo Switch for a few years, but we just weren’t ready to make the purchase. After much debating about the pros and cons of having a Nintendo Switch, this year Santa decided to gift our whole family one for Christmas. Let’s just say the kids were more than ecstatic! I was a bit cautious. My husband, I would say, was probably as excited as the kids!

What is a Nintendo Switch Gaming System?  What comes in the box?

I think it had been about six or seven years since we owned a gaming system so I wasn’t quite sure which to get. In the end we settled on purchasing the Nintendo Switch. I liked the game options and the ability to use it on your television (like I’m more familiar with) and also the option of easily making it into a handheld gaming system you can bring on trips or on the go.

We bought this Nintendo Switch Gaming System. It includes the actual gaming system with touch screen, a dock to hold the system, and a blue and red Joy-Con (which are the handheld items you use to play).

The part of this that kind of confused me at first were the Joy-Con controllers. Since there’s a left and right, I assumed it was only enough for one person. But you can actually turn them horizontal and each person can play using one controller. So, the system comes with enough controllers for two people. We ended up purchasing extra Joy-Con controllers so all four of us could play games together. 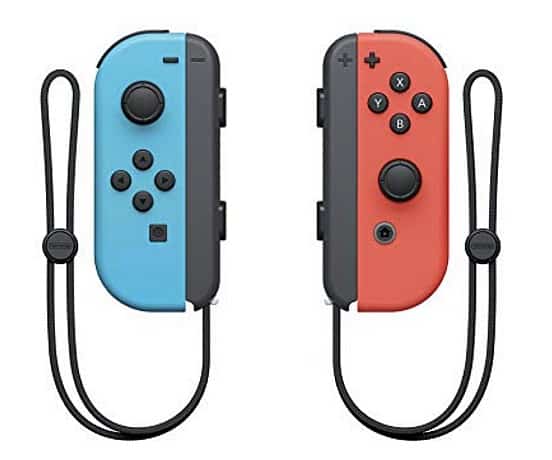 So I know I’m getting old when I was shocked at how small the games were! It’s kind of like music going from records, to cassettes, to CDs, to everything digital. I was used to big games you slide into the console, but the games now are super tiny. I love that they are small so they are easy to store and transport, but with little kids, they are also easy to lose. We had to really go over how to store the games with the kids so they wouldn’t get lost. So far so good!

Here are some of our favorite games. I’d love to hear other recommendations from those of you who also own or have played the Nintendo Switch.

1. By far the family favorite is Mario Kart 8 Deluxe! It’s a car racing game with all kinds of different tracks and characters. It’s fun for pretty much every age. I’d say it’s the game we play most often as a family. It’s pretty exciting so you will find lots of yelling and laughing- not the best game before bedtime.

2. Our second favorite family game is Puyo Puyo Tetris. (I’d say it’s actually my favorite game, but I’m someone that likes quiet, thinking games.) This is like your basic Tetris game that you can all play together. You can choose to play against one another or team up. There’s also a Puyo Puyo version. I love that we can all play this together or you can play on your own. And I’ve always been a fan of Tetris as far as helping with spatial awareness development. It’s also one of the least expensive games.

3. My husband and kids like Super Smash Bros. In this game you get to choose a character and battle each other. I’ll be honest and say I’m not a fan of this game. It’s two much action and colors and noise, but the kids and my husband would disagree with me.

4. We also own Zelda: Breath of the Wild. This is really fun, especially if you played the original Zelda back in 1989. I might find one child or the other quietly playing this on their own. (Or my husband.)

5. Some games we don’t have yet, but are on our list are Ring Fit Adventure (a fitness game encouraging all kinds of various exercise) and Just Dance 2020. We love dancing games and how they get you moving. For this game you also need to purchase extra straps to hold your Joy-Cons.

Other Items I’d Consider Getting

There are all kinds of accessories and other games you can get to add to your Nintendo Switch Gaming System.  Here’s a few that stand out to me. I’d love to hear your thoughts too. If you plan on taking the Nintendo Switch out on the go, I would definitely invest in a case to protect it like this one. Another accessory that seems like it’d be handy is this comfort grip that holds both your Joy-Cons together to resemble more of hand controllers we’re used to from past gaming systems.

Pros and Cons of the Nintendo Switch Gaming System

The main pro to this system if you’re looking at it from a family standpoint is it something you can all do together no matter what ages your kids are. Even teens will join in the fun! And like I mentioned before, I love the fact you can turn it into a handheld gaming system to take on road trips.

We are definitely a family that likes to limit screen time for kids which is why I had such a hard time feeling okay purchasing this. We have set amounts of time and days the kids are allowed to use electronics. What I’m loving though is that the kids usually choose playing the Nintendo Switch now rather than going on an iPad or phone alone in their rooms during electronic time. So instead of them being alone and away from the family, we’re usually together as a family playing games together during most electronic time- a definite plus! (Although I still feel like nothing can beat strategy board and card games. Our current favorites being Carcassonne  and Sushi Go!) 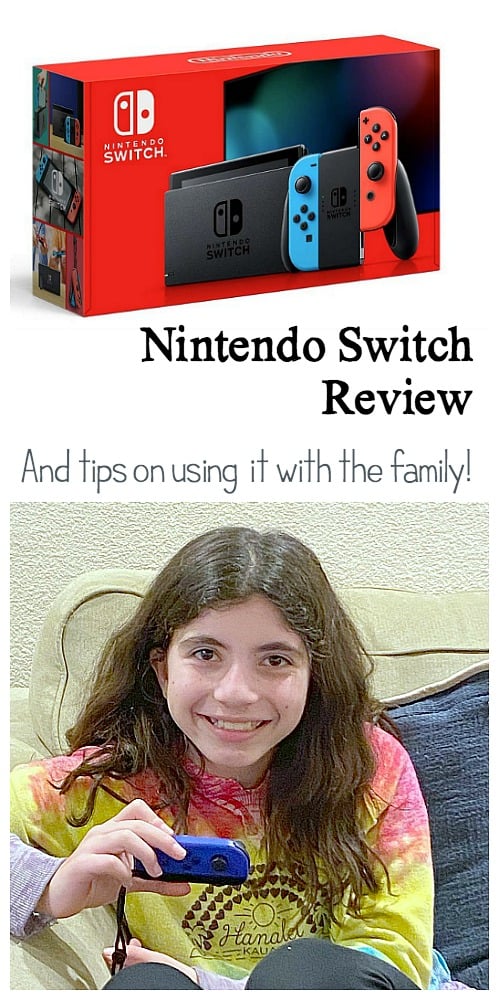