You are here: Home / Create / Special Days / Halloween / Halloween Activities for Toddlers: Mini Pumpkins and Felt
As an Amazon Associate I earn from qualifying purchases. You can read more on our disclosure page.

This invitation to play with mini pumpkins and felt squares is one of our favorite Halloween activities for toddlers!  It’s such an easy toddler activity to set up and leads to all kinds of sensory play and learning- including sorting practice and fine motor skills. 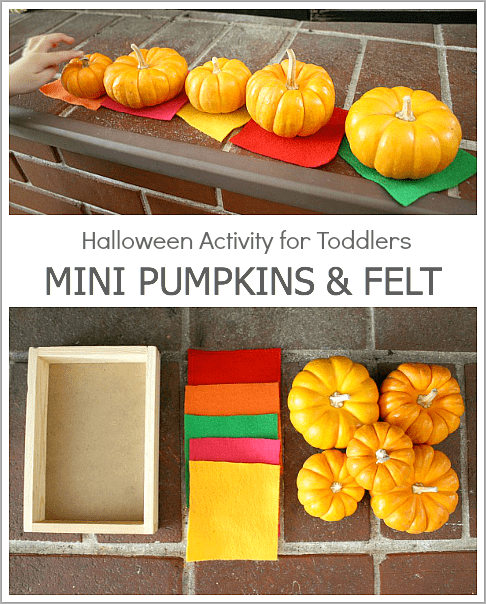 When I set up this simple Halloween invitation to play for Theo (my 2 year old), I didn’t realize just how much fun he would have with it! It was so fun to see all the things he came up with and how he encouraged me to play along! (This post contains affiliate links.)

Materials for Pumpkin Activity for Toddlers

This was super easy to set up!  The only real prep work was cutting up some felt squares. I tried to make them just a bit bigger than the mini pumpkins so the color would show even as the pumpkins were placed on top of them. 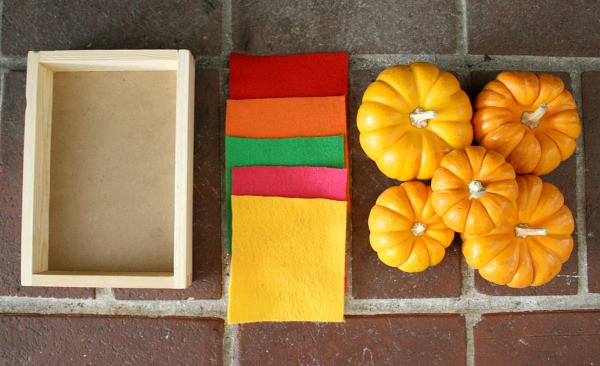 Theo started out playing with the felt squares. He loved putting the pieces of felt into the little box and then taking them out again. He also enjoyed lining the felt squares up onto the brick ledge. 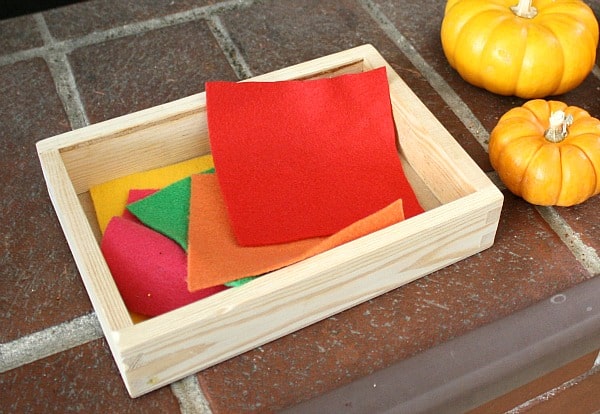 Lately, Theo has been really excited and proud to practice colors. As he lined the felt squares up in a row, he tried to say all the color names and was encouraging me to help him along the way! 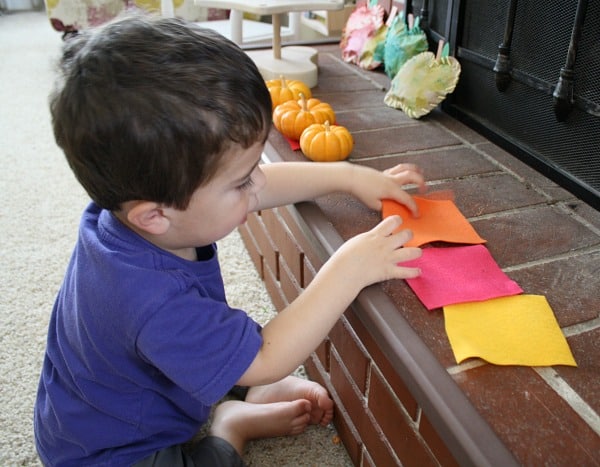 A bit later he involved the mini pumpkins into play. He’d place them on top of the felt squares in different formations. Theo has recently taken an interest in counting and enjoyed counting the pumpkins after he lined them up into a row. Again, he encouraged me to join in which was so fun! 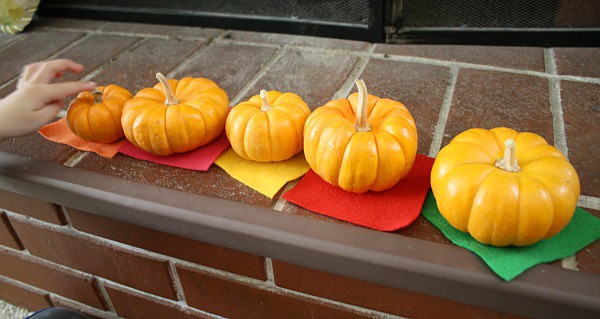 It was really neat to see how the small box challenged Theo. He brought his play onto the floor and began putting the pumpkins into the wooden box. 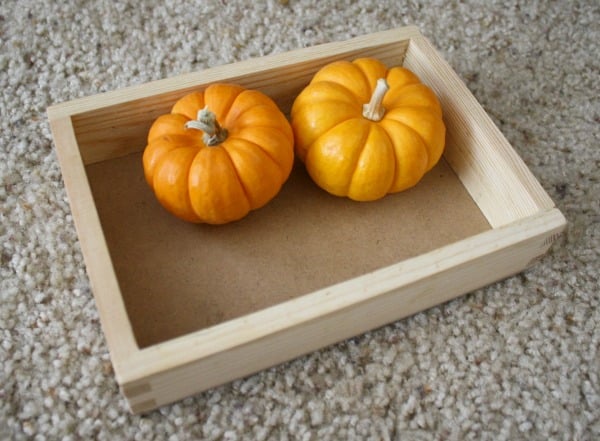 As he played, he began to realize not all the pumpkins would fit into the box at once. He was intrigued with this and continually changed up the combination of pumpkins he tried get inside. Then he started naming the pumpkins based on size while doing this. There was a baby pumpkin, a mommy pumpkin, and the biggest one he named the daddy pumpkin! 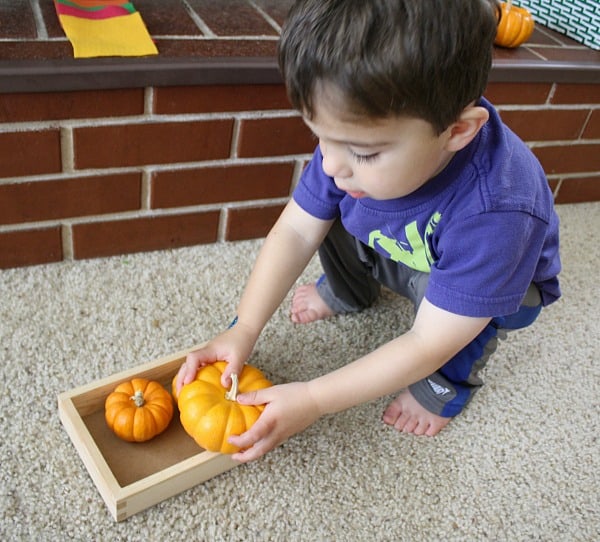 The play ended with Theo hiding all the felt squares down his shirt! He thought it was so funny when I couldn’t figure out where they were. I love how the play ended in a little game of hide-and-seek! 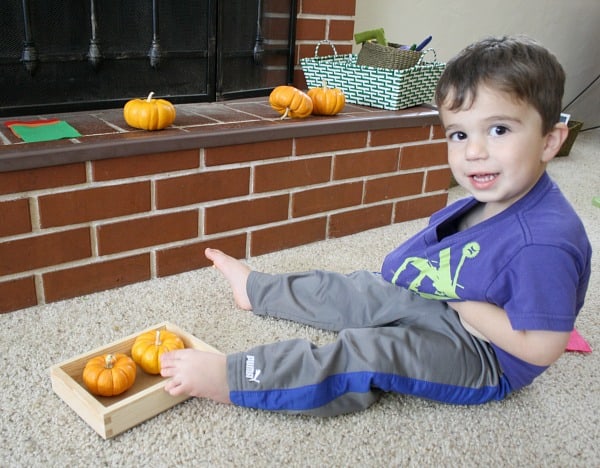 I was really surprised how such a simple invitation to play also turned into a wonderful sensory activity and involved so much learning. Theo really used this play invitation to practice his interest in colors, counting, and size comparison. And the best part was having some fun, quality time playing playing with my little guy! 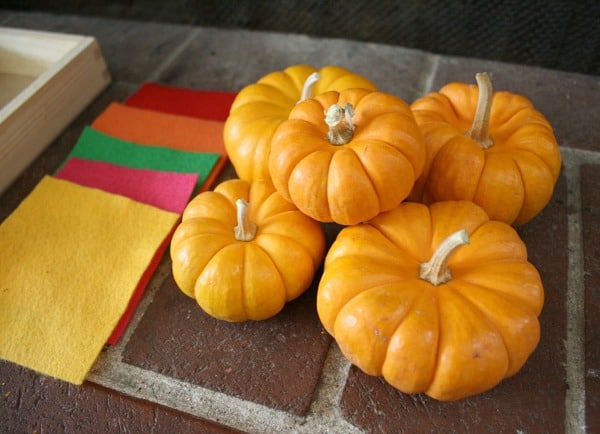 Be sure to check out all the other Halloween invitations shared this week from some of my favorite blogging friends. You’re sure to find some Halloween inspiration!