You are here: Home / By Age / Elementary / Comparing Numbers: Ping Pong Ball Toss Math Game
As an Amazon Associate I earn from qualifying purchases. You can read more on our disclosure page.

Children can practice comparing numbers with this fun and easy to make math game for kids using an egg carton and ping pong balls.  This math game can also be adapted for younger children to use for one-to-one counting practice, and it’s a great rainy day activity too! 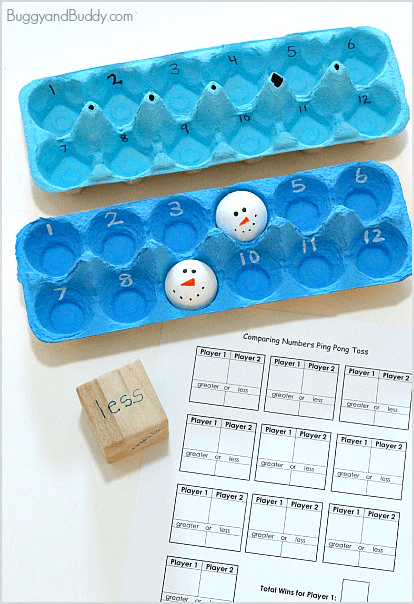 Children always enjoy learning through play, so what better way to practice comparing numbers than with a fun ping pong tossing game! Each child will take turns tossing a ping pong ball into a numbered egg carton and comparing numbers using the terms “greater than” and “less than”. It’s a fun and easy gross motor activity that can be used at home or in the classroom!

We used our trusty old snowman ping pong balls from our snowman launching lever activity, but you can just use plain ping pong balls for the activity too. You’ll also find an optional free printable recording sheet near the end of the post you can use to keep score. (This post contains affiliate links.) 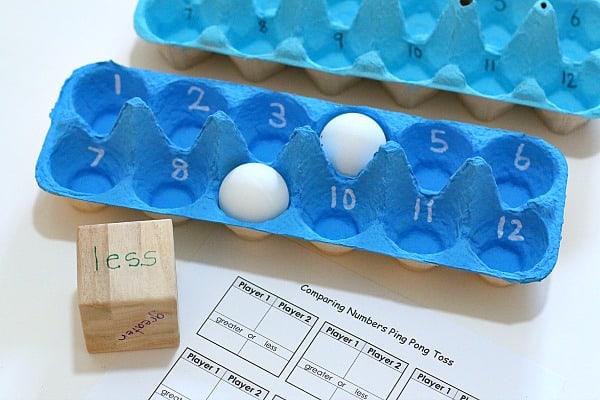 How to Make the Math Game

1. Grab an old egg carton and cut off the top. (I painted mine blue with tempera paint to make it winter themed, but painting it is not necessary.)

2. Use a marker to number each compartment of your egg carton.  I numbered my compartments one through twelve, but you could do larger numbers for kids that are ready to compare greater numbers.

I wanted to make sure the numbers showed up well so I tried to use contrasting colors for the numbering. For my egg carton painted in the darker blue, I used a white Sharpie paint marker for the numbers, and I just used a plain, black Sharpie for the egg carton in light blue.

4. Optional: Decorate your ping pong balls with some colored Sharpies. I drew some snowmen faces on ours since it’s winter. (One of my friends suggested calling the game ‘Snowball Fight’ which is perfect with our snowmen ping pong balls!) You could also choose to decorate them as insects for Spring, fish for summer… the possibilities are endless! 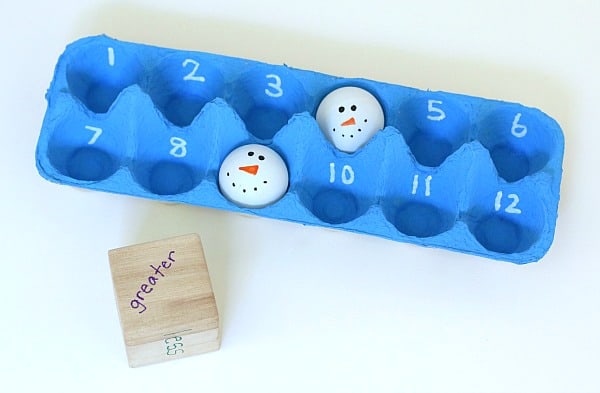 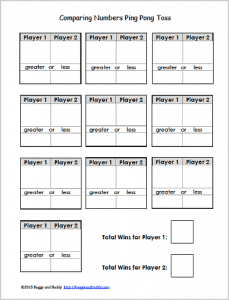 How to Play the Comparing Numbers Math Game

1. Place the numbered egg carton on the floor. Each child gets his/her own ping pong ball. The players take turns tossing or bouncing their ping pong ball into the egg carton. (Kids can keep trying until the ball actually lands in one of the compartments.)

2. Once both ping pong balls have landed in the egg carton, children say their numbers out loud. 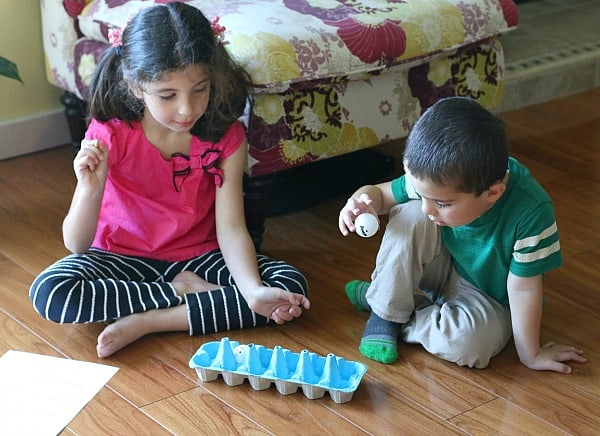 4. The balls are then retrieved from the egg carton and tossed again!

How to Use the Scoresheet

If using the scoresheet, children write their egg carton compartment numbers in the first boxes under ‘Player 1’ and ‘Player 2’. After rolling the die, the kids circle either the word ‘greater’ or ‘less’ depending on which is rolled. An ‘X’ is placed in the bottom box of the player who gets the point for that round. After 10 rounds, the number of wins for both players is added up and recorded in the bottom total boxes to see who is the winner. 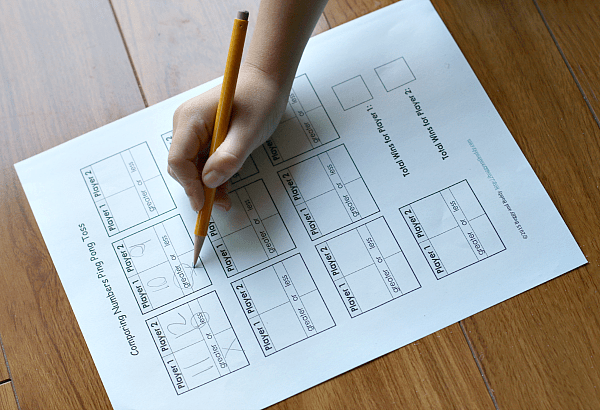 How to Adapt the Math Activity for Younger Children